AMP UP Your Teen Sessions (Part 2): The ABCs of Music

AMP UP Your Teen Sessions (Part 2): The ABCs of Music

In my last blog post, I started a brand new series on how to AMP UP your teen music therapy sessions.

I love using fresh, new ideas in my sessions, so I’m happy to share what’s worked well with my tween & teen groups.

Today, I want to share a musical game I created called the ABCs of Music.

It’s a nice ice breaker for a new group of clients or can serve as a warm up activity before moving onto other therapeutic music experiences.

Here’s how I facilitate this game:

1) Gather a stack of alphabet cards that has one letter on each card.

2) Separate your group into two teams and give each team a jingle bell to ring when they have an answer.

3) Explain to the group that you’re going to hold up cards one by one that each have a letter of the alphabet. Their job is to be the first team to come up with a musical artist or band that starts with the letter on the card. So, for example: A – Adele; B – Backstreet Boys; C – Counting Crows, etc. When they have an answer, they can jingle their team’s bell. The first team to answer correctly gets to keep that card.

4) Continue holding up a card for each letter of the alphabet until you have gone through all the letters. The team that has the most alphabet cards at the end wins! You can go through the alphabet cards a few times and change it up by asking teams to name only female artists or only bands from the 80s.

5) After you finish that portion of the game, have each team select one letter card from their pile and a corresponding musical artist or band. Choose a song by that musical artist or band and use that to facilitate a musical experience targeting one of your group’s goals. So, for example, if they chose the letter E for Ed Sheeran, you can use his song “Sing” during a choreographed dance to address gross motor goals.

I love using musical games with my tween & teen groups because not only are they inviting and “cool,” but they allow opportunities to target a wide range of goals. In the ABCs of Music game for example, we’re working on letter identification, expressive language, social skills, group cohesion, impulse control and attention to task.

Here’s what Rachel Rambach has to say about Tuneful Teens:
“When I first started out as a new music therapist, the population that intimidated me the most was the tween and teen crowd. That’s why I was so excited when my friend and fellow music therapist Amy Kalas Buser launched her E-Book, Tuneful Teens. Amy provides everything you need — step by step procedures, templates, sheet music, etc. — to implement the interventions in your music therapy sessions. I highly recommend Amy’s book.”

We’re even offering combo packs, which provide you with the best value! Click on the icon below to view our E-Book collection ~ 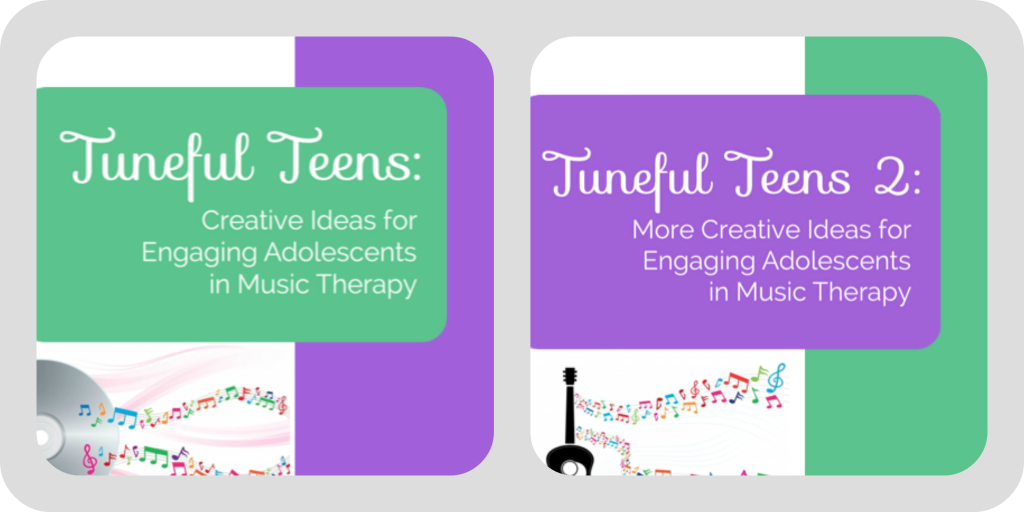