One of the places where I provide music therapy is the Chabad Center of Kendall’s Friendship Circle.

Friendship Circle is a place where children and teens with disabilities can come to take part in a variety of activities: karate, yoga, gymnastics, dance, art, music therapy, and more.

Each child and teen is paired with a buddy (a high school volunteer) who participates in all the activities with them.

I love working at the Friendship Circle for many reasons, one of them being that I get to design interventions for an older population. I have the chance to think “outside of the box” musically, learn pop songs, and think of creative ways to facilitate interaction between the group members and their buddy.

The idea of the Guess the Weather Activity came from my former intern, Patricia Chaviano, who is now a full time music therapist working for Seasons Hospice in Miami (yay Patricia!) This is how I ran the activity for the teens –

1. I printed out two pictures of each kind of weather condition: sun, rain, lightning (for thunder), rainbow, wind, and snow.

2. I then split the group into two. Each group was given the same set of weather pictures. Next, I told the group I was going to play various songs. Their job was to listen carefully and guess the kind of weather being sung about in each song. As soon as they knew they the answer, they were to place the picture with that type of weather in the middle of the circle.

3. I then played various songs (and encouraged them to sing along if they knew it):
– SUN: “You Are My Sunshine” or “Here Comes the Sun” by the Beatles
– RAIN: “Singing in the Rain” by Gene Kelly; “Raindrops Keep Fallin’ on My Head” by Perry Como; “Umbrella” by Rhianna; or “Who’ll Stop the Rain” by Creedence Clearwater Revival
– THUNDER: “Thunder Rolls” by Garth Brooks
– RAINBOW: “Somewhere Over the Rainbow” by Judy Garland
– WIND: “Blowin in the Wind” by Bob Dylan or “She’s Like the Wind” by Patrick Swayze (from Dirty Dancing)
– SNOW: “Let it Snow”

4. This group LOVED playing in teams, coming up with a team name, and gaining points in order to win. So, I awarded one point for each correct piece of information:
– Correct answer (identifying the correct weather condition)
– Correct song title
– Correct artist
– Correct decade the song was written

6. We practiced having each group play only when the picture of their weather condition was placed in the middle of the circle (once they understood the directions this was done without talking).

7. I then sang my original song “A Rainstorm is Coming.” The lyrics of the song and the pictures cued each group to play and stop at the correct time, creating a musical rainstorm.

These two activities were very effective in facilitating listening skills, attention, and peer interaction. I would love to hear some other ideas for songs that highlight different kinds of weather.

Want MORE creative ideas for engaging teens in music therapy? Check out the Tuneful Teens series to inspire your creativity: 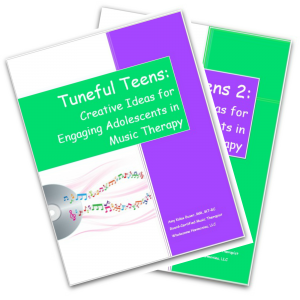